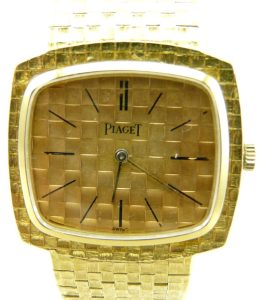 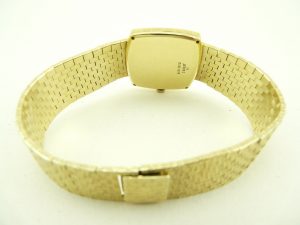 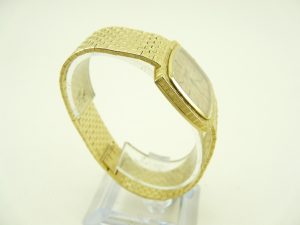 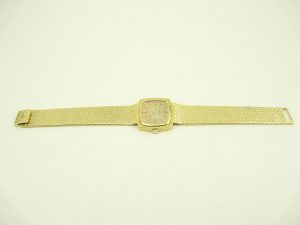 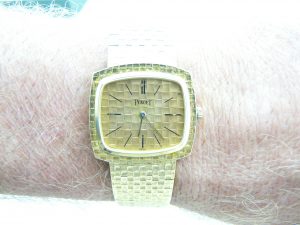 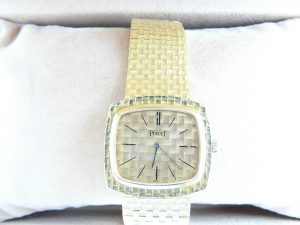 Just back from a service and polish is this rare Piaget 18k solid gold gents dress watch that will fit up to a 7.5-inch wrist. The case width measures 29 mm, and the watch weighs in at a hefty 3.3 ounces with the movement and just under 3 ounces without, but the dial is gold as well as the crown so that’s circa £4,000 worth of gold!

BOX AND PAPERS : Supplied by Watches Of Westminster.

In 1874, Georges Edouard Piaget started his first watch workshop on the family farm, situated in the small village of La Côte-aux-Fées in the Swiss Jura mountains.Situated in the Neuchâtel region, the company was dedicated to crafting pocket watches and high-precision clock movements.

In 1911, Timothée Piaget, the son of Georges Piaget, took over the family firm. The company’s policy has been to be dedicated to the production of wristwatches ever since.

Under the guidance of the founder’s grandsons, Gérald and Valentin Piaget, the Piaget brand became a registered trademark in 1943. Since then, the manufacture at La Côte-aux-Fées has produced its own creations.

As a result of this expansion, the family business opened a new factory in 1945, again in La Côte-aux-Fées.

In 1957, the manufacture at La Côte-aux-Fées brought out the Calibre 9P, the first ultra-thin (2 mm), hand-wound mechanical movement.

Then, in 1960, the Piaget watchmakers developed the Calibre12P, the thinnest automatic movement in the world, with a thickness of 2.3 mm (made official by an entry in the Guinness Book of Records).[citation needed]

In 1957, the Emperador men’s watch was launched and since its relaunch in 1999 has become one of the brand’s emblematic models.

The company’s expansion led to the opening of a new factory in Geneva, dedicated to jewellery and, in 1959, their first boutique.

In 1964, Piaget presented their first watches with dials worked in precious stones: lapis-lazuli, turquoise, onyx and tiger’s eye. Piaget then launched the cuff watch. 1976 saw the launch of the Calibre 7P, a quartz movement, during the quartz crisis.

The Piaget Polo watch with its avant-garde style, was brought out in 1979 and became one of the brand’s models. The Dancer collection was launched in 1986.

The company has been under the presidency of Yves Piaget since 1980.

In the 1990s, several new collections were launched: Possession, Tanagra, Limelight and Miss Protocole with its interchangeable straps.

Piaget brought out the Altiplano watch and in 1999 reinvented one of their classics, the Emperador line.

Watchmaking was regrouped in one collection: Black Tie.

In 2001, a Piaget Haute Horlogerie manufacture was opened in Plan-les-Ouates, just outside Geneva. The movements continued to be produced at La Côte-aux-Fées, the family’s birthplace. The new building grouped together over 40 professions in the fields of watchmaking and jewellery.

The manufacture developed mechanical movements and in 2002 brought out the first Piaget Manufacture tourbillon movement, the Calibre 600P, the thinnest tourbillon in the world with 3.5 mm thickness.

In 2004, Piaget celebrated their 130th anniversary and to this day maintain their position of one of the few premium luxury Swiss watchmakers.

Viewing : This watch is available for viewing in Central London by appointment or further afield depending on distance. We also ship worldwide via DHL , please ask for a postage quote. Payment via bank transfer only.

This watch has the rare advantage of fitting larger wrist sizes up to 7.5 inches and is supplied with 12 months warranty and a certificate of authenticity.

If you want to sell any vintage watch irrespective of condition and want to know what you can sell it for, please visit our watch valuation page;